The mythological and culturally rich Nasik countryside, today is reverberating with divine vibrations, a result of the vision which manifested at ‘brahma mahuratam’ a Viraat Swaroop Dharshan of Four Faced Ganesha on bhadrapad chaturthi to Dattayogi Shri Anna Guruji. Just like the sun rises at dawn indicating the end of a dark night, this ‘viraat swaroop’ of Ganapati, appeared at this very location, signifying a breakthrough – a divine light to guide us in the darkness which sometimes takes over daily life, because Lord Ganesha represents the power of the Supreme Being that removes obstacles and ensures success in human endeavours. 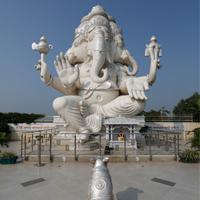 Nasik is situated on the banks of the Godavari River, making it one of the holiest places for Hindus all over the world, ‘Shri Anna Ganapati Navgraha Siddhapeetham’ is well located on a riverbank of ‘Valdevi’ in the Nashik countryside.Dattayogi Swami Shri Anna Guruji has created a ‘sanctum of peace’, even with the city in such close proximity, the mattham is a congregation of religious spirituality and a haven of solitude. This vision of the four faced Ganesha with four hands has been described in the Mudgal Puraan Shastra as one of the 32 prakaars, and it represents yaash (fame), keerti(success) and samriddhi (prosperity); Legend has it that all that spans Ganesha’s eyes is filled with prosperity and that poverty resides behind Ganesha. The four faces of Ganesha at the Navgraha Siddhapeetham bestow positivity in all directions. While the four faces represent sukh (peace), samriddhi (prosperity), aayu (long life) and aarogya (good health); of the four hands the 2 hands in mudras symbolize abham (blessings) and varam (fulfilling of ones wishes), and in the other two, he is seen holding paash and ankush. This viraat swaroop all encompassing the strength and life qualities in Ganesha, has come alive from ‘a vision’ that appeared to Dattayogi Swami Shri Anna Guriji to the pristine white idol, at 42 feet, which is the only Ganapati idol in the country; standing tall overlooking humanity and spreading positive vibrations.

Dattayogi Swami Shri Anna Guruji beloing to the ‘Navnath Panth’ tradation, so Lord Shri Dattataraya & Shri Swami Samarth’s in the Siddhapeetham makes its presence special to the Devotees, Guru is represented by Ganesha and Shakti. Shakti being Parvati(Ma Chamundeshwari). Ganesha is present in all his glory, accompanied by brother ‘Dev Senapati’Lord Kartikeya but also the ever powerful parents Gauri Shankar (Maa Chamundeshwari & Lord Shiva) a complete Shiv Parivar. The Shivling at the peetham was installed with an abhishekam of 1.25 lakh litres of milk and an offering of 1 crore rudrakshs. These rudrakshas which carry the energy of Shiva and blessings of Dattayogi Swami Shri Anna Guruji are currently being distributed by Guruji to devotees.

For thousands of years, civilizations all over the world have believed in the influence of celestial bodies (Planets,Stars,)in the cosmos on every aspect of human life. Hindu Vedic Culture attach significance to the ‘Navagraha’ and accept the key role played by these planets in shaping their destiny.

Dattayogi Swami Shri Anna Guru ji believes in Vedic astrology, which establishes a strong connection between humans and the cosmos (planets /stars). For benefit of the common man, to bring within his reach the power of Hyms,Prayers and Mantras, Shri 'Dattayogi Swami' had the vision to establish ‘the Navagraha Siddhapeetham’. Shri Anna Ganapati Navgraha Siddhapeetham is the only Navagraha temple in Maharashtra and North India, a unique place of worship dedicated to the 9 Planetary Gods and offers remedial course to nullify the unfavourable and negative influences of planets.

Each Nav Graham is accompanied by their better halves, their wives. A sure indication on the significance of the male–female energy balance in the universe, and a message to all believers that whosoever prays, bows and surrenders here, will be rewarded with fulfilled wishes.

The nine planets are Surya, Chandra, Mangal, Buddha, Bhrahaspati (Guru), Shukra, Shani, Rahu, Ketu. These planets collectively and individually influence ones life’s potential. The possibilities are determined by the positions of the planets and followers can offer prayers for a harmonious life at the Shri Anna Ganapati Navgraha Siddhapeetham’

Panch Devta’s presence in the Navgraha Mandal make it prominency ,– Shri Ganesha, Indra, Durga, Vastu Devta and Kal Bhairava, who is the “Kshetrapal” or protector for the Nav Grahas. A lot of research and understanding of the Vedas is behind this perfectly balanced temple complex, the unique combination and perfect position of each power governing our universe make it one of a kind.

All in all a visit to the “Shri Anna Ganapati Navgraha Siddhapeetham” offers all devotees a complete spiritual experience filled with divine energy.