Shri Dattatreya is a very ancient incarnation, highly venerated through the ages. Dattatreya – a Universal Guru Manifested in the recess of time of ‘Kaliyug’, when humanity had gone far from its pristine state and steeped into threshold of a time when all kinds of vices had already taken root, and the pious souls made fervent appealed for the salvage of the mankind surging forward in manifold way. He had descended on this earth to establish ‘Satya‘ (the Universal Truth), ‘Rta’ (the Cosmic Order), Dharma‘, (the perennial principles), in all its entirety. 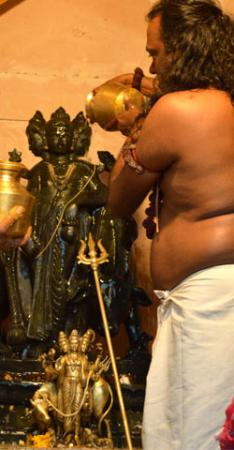 The common and the standard Pooja to remove obstacles and bestow prosperity and wealth. This pooja is done before commencing any auspicious job. Pratisthana and shodasopacharas are done which are followed by SHRI SUKTAM.

The One who has been endowed with the anubhūti (spiritual experience) of the unmanifest (nirgun) is called Datta. The anubhuti of nirgun essentially means realization that He is the soul (ātmā) or He has attained God–Realization.

Shri Datta is also known as Dattatreya, Avadhut and Digambar

Seer Atri was one of such Seers who had ‘seen’ and experienced the Brahman, the eternal Wisdom. To him was born a son, the product of the Grace or the Divine Will, which was the manifestation of all three Primal Energies of Brahma, Vishnu and Shiva. He was ordained with the three energies; He came to have the concentrated wisdom of the three God–heads or symbolically three heads. The three heads signified as Brahma: ‘Tejas’ personified, Vishnu: ‘Ojas‘personified, Shiva: ‘Tapas’ personified. Under these heads, illumination of knowledge, vigorosity of action and stringency of penance were represented as three aspects or state of being of the same.

Birth : Dattatreya had descended into the realm of world as progeny of Atri and Anusuya, a sage couple of the Vedic age. Anusuya became very famous for her devotion to her husband. She was the embodiment of chastity. Such was her spiritual power that, even hard earth turned soft and smooth for her as she walked about. This pious woman induced jealousy and envy in others, however, and the three Gods decided to prove these doubting elements how wrong they were.

They transformed themselves into mendicants, approached the hermitage of sage Atri and begged for alms. At that time sage Atri was away at the river offering his daily oblations. Anusuya came out and offered food to them. They made a strange request; the food is prepared and served to them by Anusuya, without clothes. In the Indian tradition any ‘athithi‘(guest) cannot be turned away, as they are considered to be an aspect of God. Hence she was placed in a dilemma. She smiled to herself and reflected thus: ‘I am totally purified by the long association with the holy sage Atri. What harm can the god of lust ever do to me? So I do fear nothing. As they have sought food from my hands, I look upon them as my own children and not as strangers and grown up men!’ Her thoughts – the thoughts of a pious and chaste person – instantly became reality; the elderly guests became babies!

Sage Atri on his return to the hermitage saw his wife Anusuya fondling three babies. Anusuya said “These children are the gift of God to us who have been childless so far”. Sage Atri was overjoyed and named them Datta, which means ‘given’. At this the three Gods reverted to their real forms and disclosed the truth. They extolled the power of chastity and purity of Anusuya which vanquished the combined and colossal powers of all three of them. Sage Atri and Anusuya prayed that they should remain as their sons. They consented and the three Gods merged into one body.

This is how Shri Dattatreya incarnated and is known as Gurudeva Datta – the Guru of all Gurus. 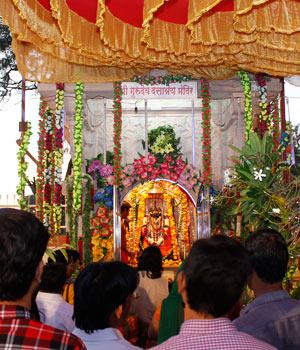 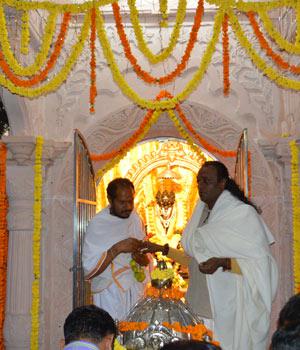