In Hinduism, Chandra is the Vedic Lunar deity Graha Soma i.e. juice. The Soma name refers particularly to the juice of sap in the plants and thus makes the Moon the lord of plants and vegetation.

Chandra is described as young, beautiful, fair; two-armed and having in his hands a club and a lotus. He rides his chariot across the sky every night, pulled by ten white horses or an antelope. He is connected with dew, and as such, is one of the gods of fertility. He is also called Rajanipati (lord of the night) and Kshuparaka (one who illuminates the night), Indu (the bright drop). As Soma, he presides over Somvar or Monday.

In Hindu astrology, the moon is considered to be one of the best planets to be born under as it promises wealth and happiness. 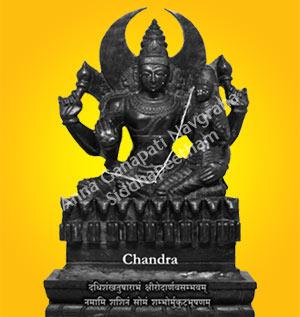 Meaning : I pray to the Moon who shines coolly like curds or a white shell, who arose from the ocean of milk, who has a hare on him, Soma, who is the ornament of Shiva's hair.

Vishesh Pooja is conducted on every Monday.