Brihaspati (Sanskrit – 'lord of prayer or devotion') also known as Deva–guru(guru of the gods). He is considered the personification of piety and religion, and the chief 'offerer of prayers and sacrifices to the gods' (Sanskrit: Purohita), with whom he intercedes on behalf of humankind.

He is the guru of the Devas (gods) and the arch–nemesis of Shukracharya, the guru of the Danavas (demons). He is also known as Ganapati (leader of the group [of planets]), and Guru (teacher), the god of wisdom and eloquence, to whom various works are ascribed, such as the Brahaspatya sutras.

He is described as of yellow or golden color and holding the following divine attributes: a stick, a lotus and beads. He presides over 'Guru–var' or Thursday.

Brihaspati is the son of Rishi Angiras (according to the Rig Veda 4.40.1) and Surupa according to the Shiva Purana. He has two brothers named Utathya and Samvartana, and has three wives. His first wife, Shuba, gave birth to Bhanumati, Raaka,Archishmati, Mahamati, Mahishmati, Sinivali, and Havishmati, his seven daughters. His second wife, Tara, gave birth to seven sons and a daughter. Through Brihaspati's third wife, Mamata, he had two sons, Kacha and Bharadwaja.

Brihaspati attained the position of preceptor of the Devas by performing penances on the banks of Prabhas Tirtha. Lord Shiva granted him this position, as well as his position as one of the Navagrahas (Nine Planets).

There is a wide debate whether Kacha was Brihaspati's offspring or his brother. But the Mahabharata states that Kacha was his brother. All Brahmins belonging to the Bharadwaja Gotra are believed to be his descendants.

In Jyotisha (Hindu astrology), Brihaspati is the name for the planet Jupiter. Brihaspati is considered to be the most beneficial amongst the planets. Brihaspati rules over the signs Dhanu (Sagittarius) and Meena (Pisces), he is exalted in Karka (Cancer) and in his fall in Makara (Capricorn). The Sun, Moon and Mars are considered friendly to Brihaspati, Mercury is hostile and Saturn is neutral.

Brihaspati in Vedic astrology is considered to be of the element ether (space) or Akasha Tattva (i.e. Akasha = Space /Sky / Ether; Tattva = Essence/ Category/Truth). This element indicates vastness, growth and expansion in a person's life. Brihaspati also represents the Sattva Guna, balance of past karma, religion, philosophy, knowledge and issues relating to offspring. He is concerned with education, teaching and the dispensation of knowledge. Humans with Jupiter dominating in their horoscope could grow fat as life progresses and their empire and prosperity increases; and diabetes is an ailment directly related to this sign. According to traditional Hindu astrology, worship or propitiation of Brihaspati or Guru (Jupiter) results in cure from ailments affecting the stomach and helps ward off sins. 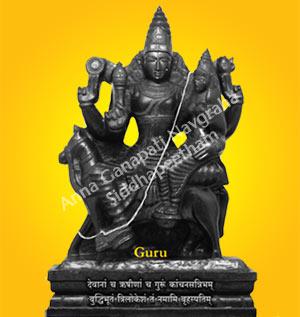 Meaning : I pray to Jupiter, the teacher of gods and rishis, intellect incarnate, lord of the three worlds.

Vishesh Pooja is conducted on every Thrusdays.