Rahu is the head of the demonic snake that swallows the sun or the moon causing eclipses, according to Hindu scriptures. He is depicted in art as a dragon with no body riding a chariot drawn by eight black horses. The rahu kala is considered inauspicious.

According to legend, during the Samudra manthan, the asura Rahu drank some of the amrita (divine nectar). Sun and moon realized it and they alerted Mohini (the female avatar of Vishnu). Before the nectar could pass his throat, Mohini cut off his head. The head, however, remained immortal due to the effect of amrita and became Rahu. It is believed that this immortal head from time to time swallows the sun, causing eclipses. Then, the sun passes through the opening at the neck, ending the eclipse. The body also turned into Ketu due to a boon, and it in turn swallows the moon on timely basis to cause a lunar eclipse.

Rahu is friends with Ketu, Saturn, Mercury and Venus. It is the enemy of Sun, Moon, Mars, and Jupiter. It is important to note that Rahu is more inimical to the Sun as compared to the Moon. Rahu is lord of three nakshatras or lunar mansions: Ardra, Swati and Shatabhisha.

In Vedic astrology Rahu is seen as an asura or demon who does his best to plunge any area of life he controls into chaos, mystery, and cruelty. He is associated with the world of material manifestation and worldly desire, as well as random, uncontrolled growth without wisdom or understanding. Rahu is a legendary master of deception who signifies cheaters, pleasure seekers, operators in foreign lands, drug dealers, poison dealers, insincere & immoral acts, etc. It is the significator of an irreligious person, an outcast, harsh speech, falsehoods, uncleanliness, abdominal ulcers, bones, and transmigration. Rahu is instrumental in strengthening one's power and converting even an enemy into a friend. He represents Tamo Guna, dualities and illusions being a naughty child of Maya. It relates to the Seventh Ray energy of esoteric astrology, as it represents a force displaying all the possibilities within the realm of existence.

In some astrological positions he is bestows of prosperity and wealth and ultimate knowledge. 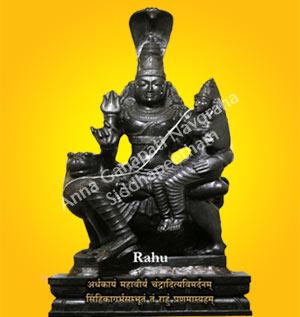 Meaning : I pray to Rahu, having half a body, of great bravery, the eclipser of the Moon and the Sun, born of Simhikaa.

Vishesh Pooja is conducted on every Saturday.