Ketu' is said to be the body of Rahu, after the head of theasura was cut off by God Vishnu. In Hindu mythology, Ketu is generally referred to as a 'shadow' planet. It is believed to have a tremendous impact on human lives and also the whole creation. In some special circumstances it helps someone achieve the zenith of fame. Ketu is often depicted with a gem or star on his head signifying a mystery light.

Ketu represents Tamo Guna and supernatural influences. It was considered, 'Ketu' being responsible for Moksha (Liberation of Soul), Sanyasa ( Give away material comfort), Self Realization, Gnana (Fore–seeing future), Wavering nature, Restlessness, Endocrine system and Slender physique. People with good aspects from 'Ketu' were Great Doctors, Priests, Thinkers, Movie stars and Social workers. Though these people with good aspects of 'Ketu' attain great heights, but they tend to be mentally detached, would not get material pleasure and joy through their great heights in social life.

In Hindu astrology Ketu represents karmic collections both good and bad, spirituality and supernatural influences. Ketu is associated with the Meena Avatar (Fish Incarnation) of Vishnu. Ketu signifies the spiritual process of the refinement of materialization to spirit and is considered both malefic and benefic, as it causes sorrow and loss, and yet at the same time turns the individual to God. In other words, it causes material loss in order to force a more spiritual outlook in the person. Ketu is akaraka or indicator of intelligence, wisdom, non–attachment, fantasy, penetrating insight, derangement, and psychic abilities. Ketu is believed to bring prosperity to the devotee's family, removes the effects of snakebite and illness arising out of poisons. He grants good health, wealth and cattle to his devotees. Ketu is the lord of three nakshatras or lunar mansions: Ashvini, Magha and Mula. 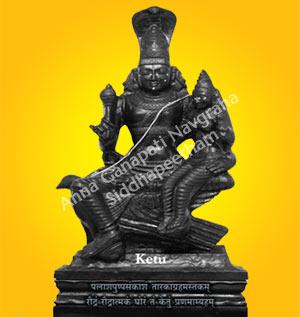 Meaning : I pray to Ketu, who has the appearance of Palaasha flower, the head of stars and planets, fierce and terrifying.

Vishesh Pooja is conducted on every Thursday.