It is said that in the beginning God, who was one, wanted to become many and enjoy himself. As the first step to creation he created Devi – the total cosmic Female force. For the male part, out of his left he created Shiva, out of his middle he created Brahma and out of his right he created Vishnu. She is more powerful than the Trinities and hence she is called Parashakti or Paradevi – Para meaning beyond. She is the Divine Mother of the universe.

The above picture of Devi Kamakshi, also called Lalita Tripurasundari, of Kanchipuram, is the closest resemblance to her description given in the scriptures – holding a lotus, noose, goad and sugarcane bow in her four hands, of reddish complexion, wearing red sari and with a crescent moon adorning her head. When all the Gods were powerless before the demon king Mahisasura, they worshiped her and she appeared in the form of Goddess Durga. During the battle with Mahisasura Goddess Durga created Goddess Kali and Goddess Chandi.

When she returned after killing him all the Gods and Goddesses worshiped and sang the famous stotra Devi Stuti in Her praise. Reciting this entire story, known as Durga Saptashati or Devi Mahatmyam, is a highly auspicious one. Reciting Her Lalita Sahasranama Stotra and Lalita Trishati Stotra are repeatedly prescribed in the scriptures as the best worship for all round success. She is engaged in the continuous process of dissolution and recreation of the world as Lord Shiva’s eternal consort. With Shiva She is Shakti, with Mahakala She is Smashana Tara, with Bhairava She is Bhairavi and so on. The Sri Chakra or Sri Yantra is the Tantrik diagrammatic representation of Devi. There is nothing like worshiping the Devi. 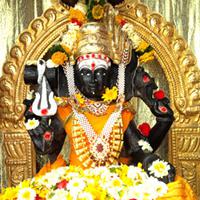 The common and the standard Pooja to remove obstacles and bestow prosperity and wealth. This pooja is done before commencing any auspicious job. Pratisthana and shodasopacharas are done which are followed by SHRI SUKTAM. 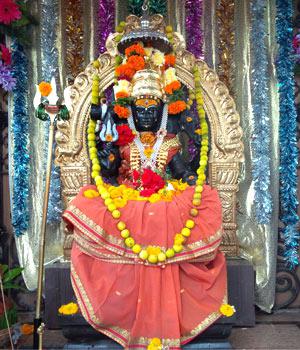 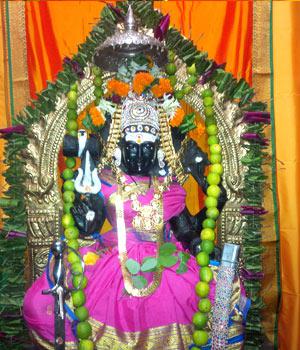 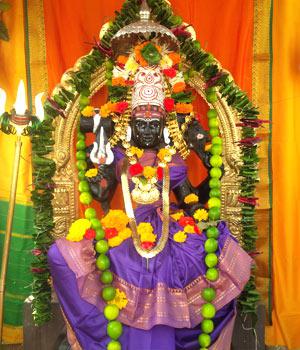 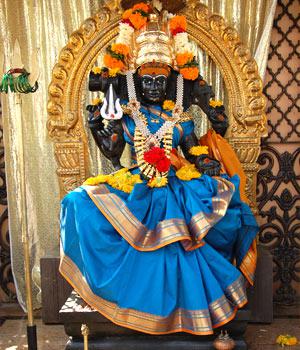 There are two basic requirements for fulfillment of human life 'Bhoga–Lokakshema' (all worldly requirements) and 'Moksha' (liberation from all bondages).

At ANNA GANAPATI MATHAM Devi has her right leg folded and her left leg unfolded which rests on the lotus pedestal, so all worldly wishes (Bhoga–Lokakshema) are fulfilled. A person who performs Kumkumarchane of Devi with the chanting, along with Devi's Divine blessings even his worldly wishes are fulfilled.

'Kumkum' obtained by offering Kumkum to Devi after Kumkumarchana is the Divine prasad of Devi, so every person can perform Kumkumarchane and apply kumkum on forehead. This kumkum is not a sign of 'Grihastha Ashrama' (marital status), but this kumkum is only the Divya Prasad of Devi.